What are we learning this week?

You may have read the poetry book, "Joyful Noise: A Poem for Two Voices," by Paul Fleischman.

Poetry, they explain, is a global language of expression, emotion, opinion, and, in two voices, perspectives. You'll hear sports, love & hate, Mother & Daughter, and many more.  Listen to how they spoke separate at times and at other times together, to show compare, contrast, and the strength of each voice and perspective.

It seems like a conversation; it could be. It could be a separate idea thinking to itself, but read together.

So think of two things: people, objects, cause/effect, problem/solution, issues. Compare and contrast the two things you choose. What would they say, to each other or by themselves? Be active and precise in your word choice, as you write what each would say. Then juxtapose your two poems into one poem for two voices.

For example. Yesterday the sun and the coneflower exchanged words in a conversation.

How might I compare and compose two voices based on those two ideas: 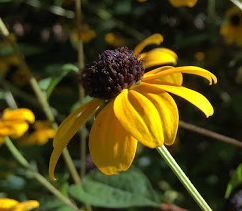 Coneflower and The Sun

Your turn!  What objects carried on a conversation for you yesterday? Use those or another two objects to create your own poem for two voices.


Note: I created the poem in Google Docs in a table for each line.
I changed the table properties by setting the table border at zero (0).
I then copied/paste the title and table into my blog.

A resource on Poems for Two Voices:
Lesson from Northern Nevada Writing Project and WritingFix
Posted by Sheri42

Please add your comment with respect of others' ideas. Thank you.

"Writing is hard fun" ~ Donald Murray
A place and a journey to write about and play with writing.
However, started in 2007, this blog has served as a place of learning and reflection for me as a writing teacher. It morphed into a site that reflects on ideas and resources affecting the teaching profession as well as resources for teaching, to share with others. It now is a playground for writing about writing -- and playing with writing. The reflections and blunders are mine; please be patient with me: I'm still asking, "What Else 2 Learn?"
Comments and suggestions are welcome; please join the conversation.
Ms Edwards
Ms Edwards About Me

Welcome to What Else to Learn...

Join us in puzzling through the process of writing well. Dare to delve into your thoughts and learning, and share those ideas with others.

Why is writing "hard fun?"

"Writing is thinking on paper."

"Writing and learning and thinking are the same process."


Our brains solve puzzles. Transferring ideas onto paper is a puzzle; it's a process that requires careful thought, and the puzzling, although hard, is fun --- we feel accomplished when we've done it right. And doing it right means, according to Zinsser,

So lets keep it clear, brief, and simple: engage your brain, enjoy the puzzle, and join in a collaborative effort to learn writing by writing.